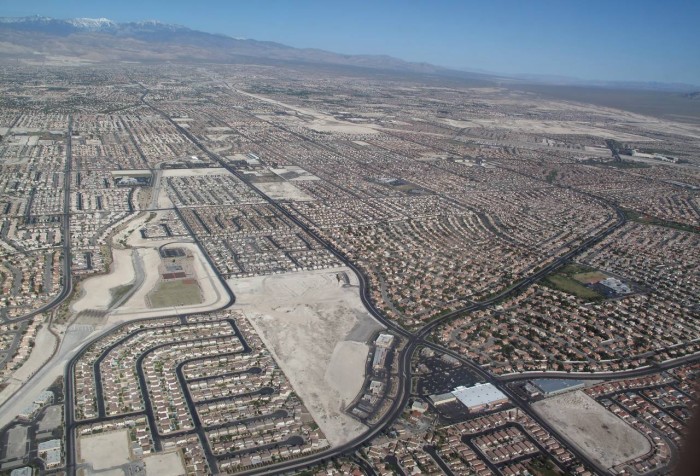 Many folks recently attended our local county planning meetings arguing against arbitrary growth control measures. Growth control measures were put in force all across the county in a good-hearted attempt to stop the loss of farmland and to end urban sprawl, such as that in the image above. The problem is when we stop building homes, we don’t stop the demand for homes! The center for Housing and Urban development did a study that showed in urban centers with growth control, home supply was short by as much as 30%! When supply falls, prices rise ~ that’s economics 101 folks.

One unintended consequence of this came to light in the sub-prime mortgage crisis. In 2002 many communities were already in short supply of homes and prices were skyrocketing beyond the reach of middle Americans. As the Feds relaxed lending rules, thousands of new buyers entered the housing market. Demand was so far beyond supply that homes were increasing in price 30% or more per year! In some cases, a buyer purchased a home and then sold it, 3 months later at a profit! Yeah, that’s a healthy market!

Now that the housing market crash and come-and-gone, and housing prices are back where they belong, most of us have learned a lesson. I don’t care if you made a gazillion bucks on your home. If you lived in a city where only 15% of the median income wage earners can afford a home (a very common statistic in the midst of the housing crunch) then you were living in la-la land. I know I was!

Housing planners are now building mixed density housing tracts, where detached, townhome and condos all share the same space. Instead of 4 homes per acre, we now average 12 in new tracts; 3 times as many homes per acre of dirt.

So where are the affordable homes?

In any given tract, the smaller, higher density townhomes and condos provide much more affordable housing than old style ranch home tracts, and they do it without any government intervention!

Before the regulators scoff and moan, hear me clearly , , , this idea is working all across the country in an open-market, non-government regulated way.  Mixed density tracts are being built around historical farms, preserving historical treasures. Downtown districts are building apartments over storefronts, bringing residents into commercial districts.  Large mixed density subdivisions are building parks, walking and biking trails, all the while providing affordable homes.

Let’s all be good citizens and quit legislating for our homes to provide a billion bucks for our retirement ~ this self serving greed is what created Dodd-Frank and the housing market crash in the first place!